"REMEMBERING WHFS:
The beloved progressive station that was 'exactly the opposite' of radio today"
By Chris Kaltenback, Contact Reporter
Mention the call letters “WHFS” to music lovers of a certain age, and don’t be surprised if a smile instantly appears on their face, or a twinkle seems to light up their eye.
Memories of a magic place right out of the ’60s counterculture playbook — of airwaves where you never knew what song you’d hear next, only that it would be a good one; of a land populated with people named Cerphe, Damian and Weasel; of a community where informality and congeniality were the watchwords, and corporate-speak was avoided at all costs — will do that to a person.
MORE . . .

FEAST YOUR EARS
By Gary Wien
It’s hard to explain just how powerful the movement of free form progressive FM radio truly was. When it emerged in the 1960s, it was unlike anything anybody had ever heard. Instead of listening to the same five hit songs over and over again, you might hear five straight songs about rain or five songs that featured the same guitarists in different bands. There were no playlists, no corporations in charge, only DJs.
MORE...

Influential '60s FM Station WHFS Chronicled In New Documentary
Jim Clash, contributor, Forbes.com (part 1)
If you grew up in the Washington, DC, area in the 1960s and 1970s, as did this reporter, there was one consistently hip radio station that the cool people listened to: WHFS, broadcasting from high atop the Triangle Towers building in Bethesda, MD.
The station was neither high-powered (just 2,300 watts) nor commercial, but its progressive choices in rock music, politics and equality programming caught the wave of a turbulent time period and rode it for two decades – from 1961 to 1983 – on an FM frequency of 102.3 MHz. “We were right in the middle of it,” said Jonathan “Weasel” Gilbert, a former long-time DJ for the station.
MORE...

'Feast Your Ears' Producer Jay Schlossberg Dishes About Anticipated WHFS Documentary
Jim Clash, contributor, Forbes.com (part 2)
In Part 1 of this series we introduced readers to the upcoming documentary, “Feast Your Ears, The Story Of WHFS 102.3,” ... Here, we interview the film’s producer, Jay Schlossberg, 61. Schlossberg’s day job, by the way, is president of Media Central LLC. He is a former staffer of WHFS.

Jim Clash: What made WHFS so special versus other FM stations?
Jay Schlossberg: Though WHFS started playing mostly classical, jazz and/or middle-of-the-road music in 1961, like most FM stations in the era, things began to change in 1968 when they aired their first “free-form progressive” show and, within a year, this changed everything.
MORE...

When Bethesda Was Cool
In the 1970s downtown Bethesda was the center of the local musical universe by James Michael Causey
It was March 14, 1979, in downtown Bethesda, and radio disc jockey Don Grossinger was sitting shoulder-to-shoulder in the cramped on-air studio of Washington High Fidelity Stereo (WHFS) 102.3 FM with reggae legend Peter Tosh, co-founder of Bob Marley and the Wailers, and Program Director David Einstein. “All of a sudden, Peter decides he wants to play some music, but he doesn’t have a guitar,” says Grossinger, now 64. Not wanting to miss the opportunity to hear one of his idols perform, Grossinger thought quickly.
MORE.... 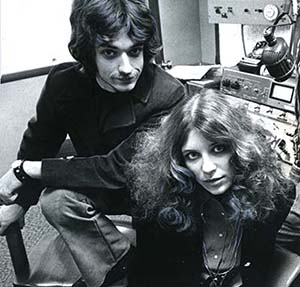 “Spiritus Cheese” sounds like a character from a Harry Potter novel or perhaps an incantation a Hogwarts wizard might chant to make Stilton palatable to the lactose intolerant.
In fact, “Spiritus Cheese” was “the Washington area’s most imaginatively programmed radio rock show.” At least it was in 1970, when those words appeared in The Washington Post.
Spiritus Cheese was also the trio of Bard College graduates who created the program and basically made the WHFS of local legend — a Bethesda-based radio station that in the 1970s and early 1980s occupied 102.3 on the FM dial and a special place in the hearts of Washington-area music lovers
MORE...

Remembering WHFS and its Two Founders 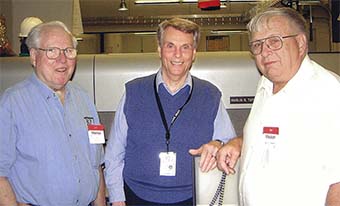 by Marlin Taylor, Sept 2018
The story of this station’s birth, which occurred in the early 1960’s, is more like ones from radio’s pioneering days of the 1920’s and early 30’s than from the industry’s modern era following The Second World War. And I was privileged to play a small role … to program and operate the station.
Even though I share a fair amount in my memoir, with the passing in early August of the second of the two partners — William A. Tynan at age 91 — who with Robert J. Carpenter founded the station in 1961 … I feel a need to go a little deeper into the story of how it all began, as told in their own words.
First … who were Bill and Bob? Plain and simple, they were two gentlemen who had obtained engineering degrees, had met through their mutual interest and activity in amateur (“ham”) radio circles as well as an interest in radio broadcasting.
MORE... 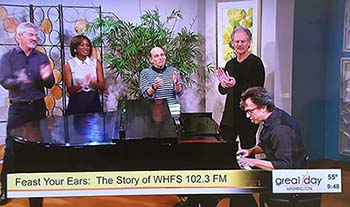 WHFS Documentary Drawing Big Support
by Aaron Kraut
For many who grew up in the Washington, D.C. area during the late ’60s and ’70s, WHFS 102.3 FM provided the soundtrack for a generation of protest and cultural change.
The station, which until 1983 occupied a cramped office and studio in Bethesda’s Triangle Towers apartment building, was the first freeform radio station in the area and essential for fans of progressive rock. It built a large following, produced local radio legends such as Don “Cerphe” Colwell and Jonathan “Weasel” Gilbert and introduced listeners to artists like Bruce Springsteen and Emmylou Harris.
If a group of WHFS veterans and longtime fans can raise enough money, the station that beamed its music “from high atop the Triangle Towers” will be the subject of a roughly 90-minute documentary that’s in the works from director Jay Schlossberg and a team of producers.
MORE...

‘No Suits. No Corporate Control.’ Remembering The Freeform Heyday Of WHFS 102.3
By Ally Schweitzer, October 2015 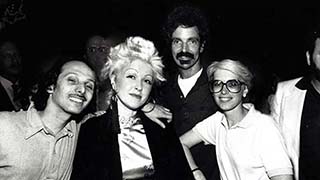 "WHFS in Bethesda, Maryland, coming to you from high atop the Triangle Towers. Ease on back, take your clothes off and have some wiiiine…"
If you listened to D.C.-area radio station WHFS in the early 1970s, you might have heard that station ID. Recorded by a local character named Fang, it was one of many wild-and-crazy sounds floated on WHFS’ airwaves during its scrappy heyday — long before the freeform station went mainstream and lost its, well, fangs.
MORE...

Feast Your Ears: Film to tell homegrown radio story of WHFS
by E.B. Furgurson III, July 2015
Once upon a time, and a very good time it was, there was a little radio station named WHFS.
For six years the station fed eager listeners its eclectic mix of music from studios in Annapolis. But before that, from about 1969 until the station moved here in 1983, WHFS was a vanguard of progressive radio, molding musical tastes and reflecting the culture — and counterculture — of several generations, from Woodstock to punk and new wave, and beyond.
A documentary film, "Feast Your Ears: The Story of WHFS, 102.3 FM," now in mid-production hopes to showcase the times, people and music that capture WHFS' influence on the local music scene.
The film's producer Jay Schlossberg hopes to have a rough cut by the end of the year and have the film ready to roll sometime next year.
MORE...

Those Were The Days My Friend
by Jim Bindeman
Growing up in Bethesda in the 1960s and 70s, the soundtrack of my youth was broadcast on an jupstart, rebel radio station that wasn't afraid to leave orthodox radio programming behind and as a result changed the way Washington's younger generations listened to radio and heavily influenced rock 'n roll radio across the country.
MORE...

New WHFS Merchandise Is Available for the First Time in 30 Years
By James Michael Causey, photo by Deborah Jaffe 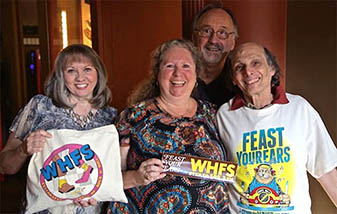 Nancy H. Showacre, Adele Abrams, Ty Ford, & Weasel
Last Wednesday, dozens of former WHFS DJs and other personnel gathered at the Bethesda Blues and Jazz Supper Club to unveil the beloved radio station’s first bumper stickers and T-shirts in more than 30 years to promote Feast Your Ears: The Story of WHFS 102.3 FM, a documentary in progress by Jay Schlossberg.
Feast Your Ears will focus on the station’s heyday from 1969 to 1983, when it was a beacon of anarchic music and personality in a sea of bland corporate radio. The documentary features interviews with HFS staffers and period DC music luminaries like Nils Lofgren, Bill Danoff from the Starland Vocal Band, Mark Noone of the Slickee Boys, and 9:30 Club owner Seth Hurwitz. Marshall Crenshaw, Roger McGuinn from the Byrds, and Terry Adams from NRBQ are among others who will appear...

And What A Time It Was
by Ellyn Wexler, Aug. 31, 2016
Jay Schlossberg wants to take us back in time to an “era of cultural, social and political upheaval.” During those years–from 1961 to 1983, he and countless other mostly teens and twenty-somethings were steadfast fans of the free-form progressive radio station that rocked the metropolitan area’s airwaves from the Triangle Towers apartment building in downtown Bethesda.
MORE....

Radio rewind: When WHFS was D.C.’s on-air hangout for cool people
by Neal Augenstein, July 2015
WASHINGTON — Long before the Internet and Google, a place existed where local music fans could hear obscure songs and learn about artists they’d never heard of — its “URL” was 102.3 FM.
The in-the-works documentary “Feast Your Ears: The Story of WHFS 102.3″ will take viewers “on a psychedelic trip back to the ’60s, ’70s and ’80s, when free-form, progressive rock radio was in its heyday,” the project’s website says.
From an unassuming studio “high atop the Triangle Towers” in Bethesda, WHFS was an important rallying point for many music fans.
“I can’t wait to see it,” says former WHFS DJ Cerphe Colwell, who appears in the film.
Cerphe was hired in 1970 to do a Saturday-night show from 7 p.m. to midnight. “It was just part time. I was broke at the time. I was a starving art school major. Once I landed that HFS gig, I looked at the world like I was seeing it for the very first time.”
MORE...
PODCASTS ETC.

NBC4 FEATURE ON FEAST YOUR EARS 'HFS DOC
On Friday, Nov 4, 2017 Wendy Rieger aired a great segment on the upcoming documentary, interviewing Jay and Weasel. You can view the segment online:
CLICK HERE